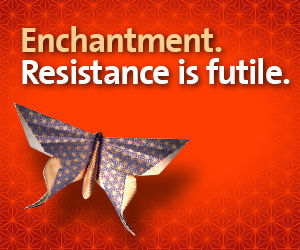 I just finished Guy Kawasaki’s Enchantment, which the sassy Suzanne Vara was kind enough to loan me. In a word, I found the book to be….

There are a lot of good things to say about this book. First, I would say that even though you, like me, may just know Guy via his Twitter presence, this is not really a Social Media book. In fact, I found the chapter dealing with Facebook, Twitter, LinkedIn, and YouTube to be the only major lull in the book.

Instead, Enchantment tells you how to work with people effectively during this rapid-fire, digital age. The lessons learned can be applied to your Social Media presence, but they can also be usefully applied to your role as an entrepreneur, a sales person, a boss, or an employee. The book takes the concept of engagement and dissects it so that you can better understand things like:

The concept of “giving to get” and exactly what that means

The power of getting that first follower or first subscriber

Promoting (but not too much)

And how to avoid getting enchanted by things that can be harmful to you.

The book is full of good advice, much of which is backed by short snippets explaining real-life examples.

What I particularly enjoyed about this reading experience, though, was that I got to experience Kawasaki as an engaging person because of his writing style. I first heard of Guy maybe 3-4 years ago. He was doing a webinar for MarketingProfs on how to “kick butt” on Twitter, and I gave it a look. I was thinking, “So wait – why would you update your friends from the grocery store?”

By the time I got to Twitter a year ago, Guy had gotten to that point on Twitter and in the Social Media world where it’s virtually impossible for a new person to engage. This book gave me a better idea about the person who is actually behind all of those crazy tweets!

Previous Post: « How Engagement Can Make You Money
Next Post: Why you can’t be the next Copyblogger »