The next book on my self-assigned summer reading list is Bob Garfield’s The Chaos Scenario. I’ve read the first two chapters so far (plus the intro) and the stage is set for some pretty hard-to-swallow realities. Garfield has illustrated two points so far in undeniable, vivid color. First, people are not consuming content in traditional ways. No more TV watching, no more newspaper reading, no more radio listening. Second, we are living in what Garfield calls a “post advertising age” that will depend upon “listenomics” much more than a display ad or a 30-second spot.

There  are two reasons why these ideas cannot be debated. First, annoyingly, Garfield builds a really good case for both concepts. Second, we’re living it. Here, let me show you. Answer the following questions in the comments section below:

1) When was the last time you listened to the radio, either public or commercial?

2) When was the last time you watched a television show live, when it was actually on, without fast forwarding through commercials?

3) When was the last time you learned about a news story from the newspaper or television BEFORE learning about it on the web?

Garfield presents all of this information with the passionate position that this is the new world order. This is a revolution in progress.


Where the title comes in

I don’t argue with the fact that we’re in a revolution now. But again I must come back to the fact that it is in human nature to counter things that are revolutionary eventually. Maybe right now nobody wants to pay for content. Everyone can be a resource. Nothing needs to go through pesky quality control. But maybe people will change over time. Maybe they’ll say, “Man, I miss the days of the New York Times (before they were known for plagiarism) and Walter Cronkite. I wish we had content of a higher quality. Heck, I’d pay for it.

I was trying to think of a more recent counter-revolution, and what I came up with was the change in popular music from 1994-1997. Some of the hits of 1994 included “Black Hole Sun” by Soundgarden. 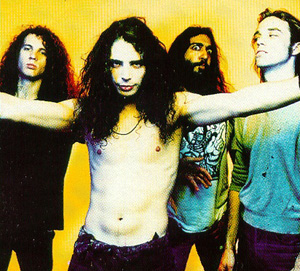 Or maybe Beck’s “Loser” was more your style back then. Maybe “Closer” by Nine Inch Nails. Ya know, Trent Reznor:

In 1997, Hanson was one of the most popular groups of the year. That’s right, these guys:

Mmmbop, that’s a change. A quick change. A major change. I’m just saying, things are changing rapidly now. Who knows where we’ll be three years from now. Maybe we’ll be back to bunny ears and rotary phones.